NC State IT has been a national and statewide leader in innovation of campus IT for decades, starting with the Eos and Unity environments in the 90’s to today’s Virtual Computing Lab (VCL), communications, networking and partnerships with our colleges to support and enable their goals. We are believers and practitioners of the shared services and centers of excellence models. Shared services are groups working collaboratively to define, manage and maintain a service-at-scale that benefits all parties. A center of excellence is using a service provided by a group that has reached scale; this service provides superior value over other providers.

REPORTER: Collaboration for a Custom-Fit Solution

Non-credit courses are increasingly valuable tools for enabling lifelong learning enrichment for the NC State community and beyond.

Growing demands for this wide variety of fee-based and no-cost courses prompted several campus units at NC State to seek a centralized system for tracking on-campus and off-campus registrations for them. Among other requirements, that system would have to be compatible with certain others on campus, such as our PeopleSoft Human Resources System.

No off-the-shelf software product could meet all the university’s capacity and flexibility requirements, and there were no internal resources for creating one.

Fortunately, OIT found a solution in the area of Application Platform as a Service (PaaS). This cloud-based service provides for agile development and has the potential to meet Payment Card Industry (PCI) requirements. Following demonstrations from three companies, Mendix was selected in June 2015 to create the new service, dubbed REPORTER, and in September work on it began.

The key to REPORTER’s creation and development has been collaboration on several fronts: within the original service development team, between the Enterprise Application Services (EAS) division of OIT and Mendix, and between EAS and the campus units using REPORTER.

REPORTER can be realistically evaluated only by the course administrators, instructors and registrants who use it, and so far it is working well. Its built-in flexibility allows for turning features on or off as needed.

REPORTER is currently being used by three campus units: Environmental Health & Public Safety (EH & PS), Industry Expansion Solutions (IES) and the Controller’s Office. Other units will adopt it as PCI issues are resolved and additional functionality is incorporated.

At present, only IES is approved by the Controller’s Office to use REPORTER for fee-based courses, but by mid-August, more of these are expected to be included after PCI approval is completed.

Dr. Amy Orders, assistant director and radiation safety officer in EH&PS, has high praise for REPORTER. Her unit was the first to begin using it in January 2016.

According to Orders, streamlining documentation, providing a paper trail and being extremely easy for class participants to use are a few of REPORTER’s advantages over various one-off solutions that EH&PS had tried in the past. The minimal feedback from registrants suggests that they are easily using REPORTER without having to ask for help, she said.

Orders looks forward to having access to Archives, an administrative feature that is still under development. She commends OIT for making this service available as well as continually making it even better.

Wendy Laing, operations manager in IES, sees REPORTER as a great improvement in course management. Laing said IES began using REPORTER in March 2016 and has about half of its courses in the system; the rest will transition to it during 2016-2017. Registrants have immediate access, and administrators can see everything without having to switch to other applications, she said.

Laing said she is looking forward to forthcoming functionality for monitoring the progress of registrants in certification programs and for managing seminars, conferences and similar external outreach events.

Cheri Pipkin, business engineer in EAS, said that the Controller’s Office has been using REPORTER since May 2016 to handle registrations for their required PCI compliance courses, all of which are now in REPORTER. Previously, they had used Moodle and spreadsheets to keep track of course registrants. With the new system, records are better organized and all in one place, making it easier to determine who has taken the required courses and who still needs to do so. In the future, they would like a feature that makes that determination automatically.

Overall, REPORTER is seen as a “win-win-win” —  an all-in-one service that is enabling course administrators, instructors and registrants to streamline educational and administrative experiences for all involved.

Effective June 1, 2016, OIT Software Licensing Management began reviewing all campus requests to purchase software applications and renewals over $5,000 to ensure they meet university, federal and state guidelines for security and accessibility. These requests include:

This initial review has the potential to save the university time and money by preventing departments from purchasing software that:

OIT has worked closely with campus partners, including Materials Management and the Office of General Counsel, to develop the review process.

For additional information, see the IT Purchase Compliance Information website. 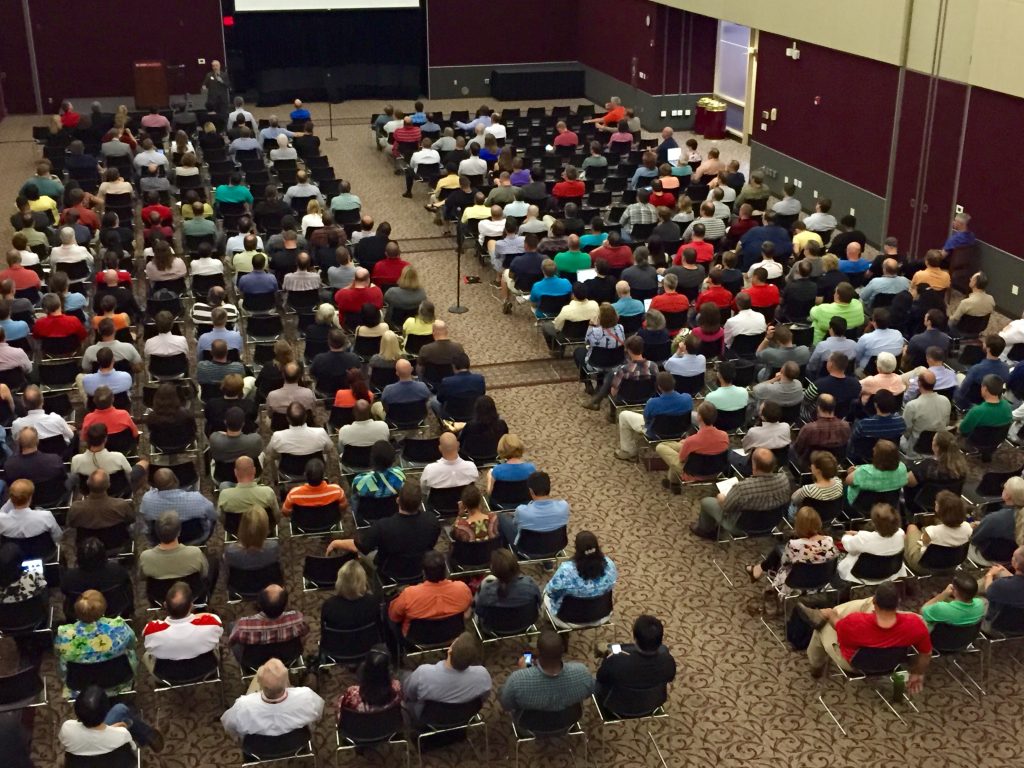 IT community gathers to discuss latest campus IT initiatives

Dr. Marc Hoit, vice chancellor for information technology and chief information officer, invited anyone who had a role in providing IT services on campus to NC State’s “IT Community Event” last summer.

With the launch of phase II of the University IT Strategic Plan, the “IT Community Event” exemplifies the strategic goal to foster a collaborative IT culture by bringing IT professionals together to discuss the latest campus IT initiatives during an informal gathering. Topics discussed during the meeting included:

OIT also held two IT Campus Community Meetings during this fiscal year to discuss Partners in Innovation: A Strategic Plan for IT at NC State, 2014-2020, which provided an overview of the university’s IT Strategic Plan first-round initiatives. With its development, the university hopes to make IT an even better enabler of success for education, research, outreach, and business operations. For more information, see the IT Strategic Plan’s Implementation Process website.

Envision a secure State! was the first of the “IT Community Exchanges (ITComEx)” to bring university IT staff together to discuss items of interest.

Other exchanges included topics on:

With the success of the IT Community Event and first round of ITComEx sessions, the campus IT community has suggested multiple topics of interest for future ITComEx events.

NC State University entered into an agreement with DLT Solutions, an Amazon Web Services (AWS) government-authorized re-seller that offers cloud solutions on behalf of Internet2 and its university member community.

Under the Internet2 negotiated terms, account owners can continue to use all of the functionality provided by AWS. However, the price of services is currently 3 percent less because of the aggregate volume of collective purchases by campus. In addition, many accounts may be eligible for a DLT data egress waiver, which allows a reasonable amount of data to be moved to a different location without an additional cost. 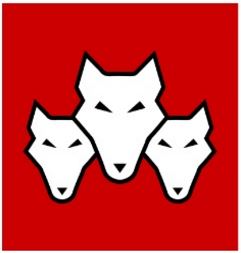 Wolfpack Sports Television is out, and PackTV is in as the new name of NC State’s 24-hour sports television station on Channel 32.2.

OIT Media and Student Services plans to launch PackTV on Apple TV and Roku this fall to reach even more viewers. The channel has been renamed to alleviate the confusion between Wolfpack Sports Television and Wolfpack Sports Properties, which manages broadcast rights for NC State Athletics. On-demand events and live programming will also be offered this fall.

OIT announced the availability of Office 365 to students, faculty and staff to download to their personal devices. Office 365 is Microsoft’s latest version of its Office suite of software, including Word, Excel and Powerpoint.

University employees who want to download any of the MS Office products to their work computers should check first with their IT support staff; software licenses should be accessed via Software @ NC State.

Although Office 365 is now available, Google Apps @ NC State is the university’s primary collaborative application suite. OIT recommends that you use Google Apps for collaboration rather than Office 365. 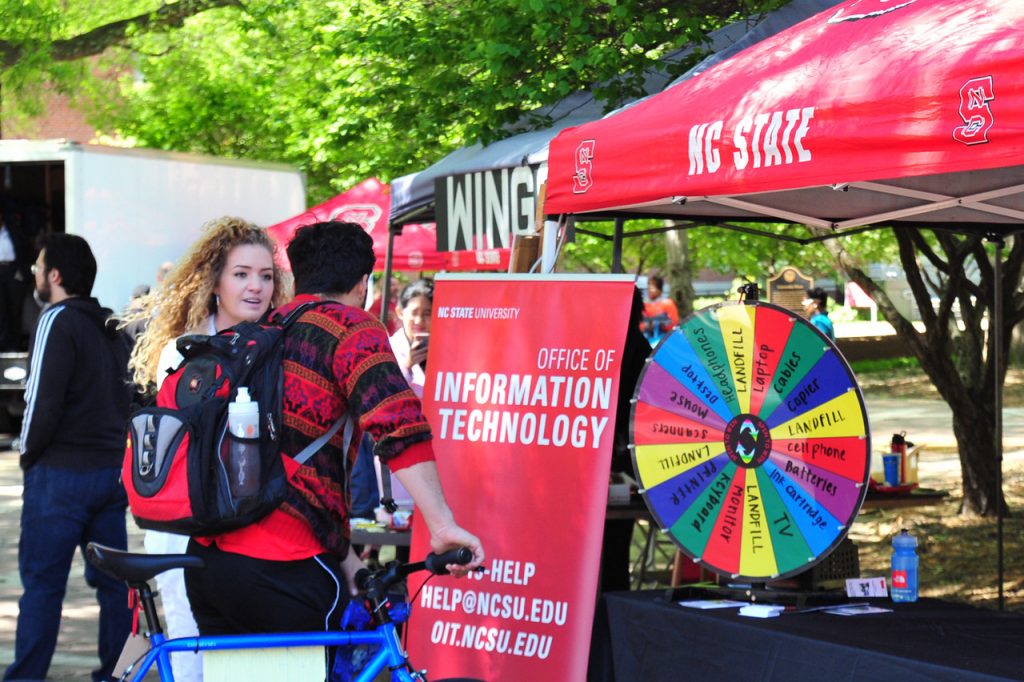 During this year’s Earth Fair, OIT Project Management Lite interns showed campus users how to make the world a better place by learning more about Green IT!

Learning about Green IT at NC State Earth Fair

During the NC State Earth Fair in April, OIT sponsored interactive and fun activities to show campus users how to:

On May 19 — Global Accessibility Awareness Day (GAAD) — OIT challenged the campus community to simply visit their department’s or favorite website and try to navigate to important content and activate site links with just their keyboard.

The #NoMouse Challenge is a global effort to raise awareness about accessible Web design and offers an opportunity to experience challenges some people with disabilities have while using the Web.

During the challenge, if users were unable to navigate the site or activate site links, OIT suggested that they take a moment to add keyboard focus (or shortcuts) to the Web page and also inform the site’s webmaster of any challenges they experienced.

The purpose of Global Accessibility Awareness Day is to get people talking, thinking and learning about digital (e.g., Web, software, mobile) accessibility and users with different disabilities.

Through its Captioning Grant program, NC State awarded 24 grants totaling $60,000 to faculty members to create captions for videos, including Mediasite.

The program provides funding for captioned videos when: